Cajamarca, another name on the map that became a home. As I prepare to leave I wonder how I’ll remember my 26 days here. Life in Cajamarca has been a busy whirl of doing things but I’m not sure I’ve really invested in many memories. But I like that. It feels as if I’ve had a ‘normal life’ for a few weeks. I’ve shopped in the same markets as Peruvians, I’ve trodden the same streets, ridden in the same moto taxi’s and hidden from the same storms. From the welcoming home of Vicky and Mirita I’ve watched a Peruvian family bounce through its daily and weekly routines. And I’ve found my own happy rhythms, buying off the same vendors and basking in the warm recognition that loyalty wins. I’ve done little things and completely ignored my touristic responsibilities. The bus back to Kuelap never happened, the rides out to the multiple attractions surrounding Cajamarca never happened either. But I feel no remorse for this, I am happy. After arriving in town a little tired and jaded I needed this. I needed just to sit back and absorb the cultural nuances of Peruvian life.

A happy and mobile Jo in front of Cajamarca

It feels like more than the three weeks it’s been since my sister, Jo jetted out of town and back to the UK. Not that it was that simple! By complete accident we managed to time our stay in Cajamarca with the annual carnival. A time of general mayhem, over-booked and price-hiked hotels and considerable disruption to just about everything. The worst thing about this ‘happy’ coincidence was that for the couple of days before carnival officially starts large groups of youths menacingly roam the streets. Getting progressively drunker as the day goes on they revel in flinging paint at everything and anybody. By the end of it the entire town looked like a Jackson Pollock mistake. In no mood to be doused in primary colours Jo and I locked ourselves in our hostal. It felt like being imprisoned, an enormous shock after the freedom of the road. 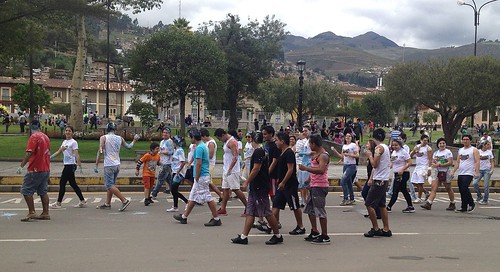 A group of potential paint aggressors stumble through the Plaza de Armas. I have to admit that they scared me. I really didn’t want to get covered in paint. One of few tourists around with a rather conspicuous facial adornment, I felt like a natural target. I was so worried that I wouldn’t even get my camera out… this is one of Jo’s photos

It just so happened that Jo’s flight out of Cajamarca fell on the same day as the first day of carnival parades. It also happened that our hostal was on the carnival route. When we headed out to breakfast in the morning we found the hostal entrance blocked by chairs and a growing crowd. This prompted an about turn, quick pack and hasty escape. Not so easy with a boxed bike ready for flying. After killing time over breakfast we carted Jo’s bike box through the closed streets until reaching traffic and the chance to hail a cab. Next thing I knew Jo was in a heap on the road and clearly in a lot of pain. She’d managed to fall down an awkward curb and damage her foot. There was nothing we could do apart from loading up a cab and sending her off to the airport. That was the start of her journey from hell. It took her well over 30 hours to get back to London via Lima and Toronto. Time punctuated with an ambulance ride to hospital in Canada. Her foot was so bad she couldn’t get off the plane. Turns out she’d broken a metatarsal in two places. Oops. Ouch.

As Jo was suffering through the end of her tour I was settling into an altogether more comfortable scenario. Through Bike Cajamarca I’d chanced upon Casa Mirita (which I then learn’t is in the Lonely Planet). Run by two sisters Vicky and Mirita, this warm and genuine homestay was just what I needed. In fact it was so perfect, I’m still here three weeks later! Better still, when I turned up there were already two lovely Canadian ladies here. Jen and Robyn had come to town for the carnival, a motivation lost on me at the time. I was happy to have left the city center and all its associated revelry behind. But finding a place to relax combined with the vitality of new friends soon spurred my curiosity and I found myself venturing out with Jan and Robyn to get the full carnival experience… 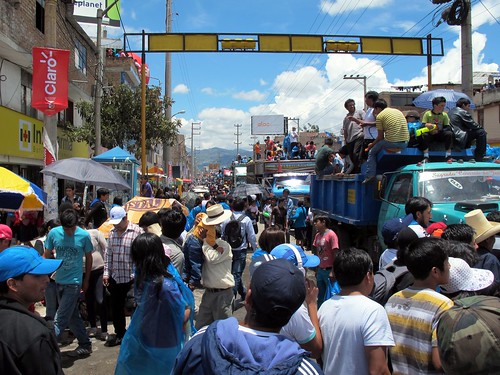 On arrival at the carnival route we found it totally closed in with trucks and fencing. It took a while to find a break in this line to force our way in through. We then had to pay S20 each to sit down 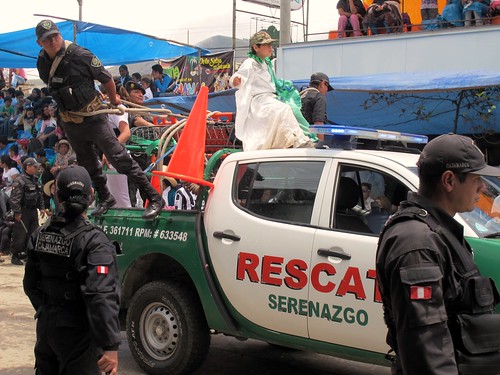 After a fair amount of waiting vendors suddenly started moving off and a Police vehicle marked the start of the parade. Why there were two Police officers hanging off the side of this lead truck I have no idea 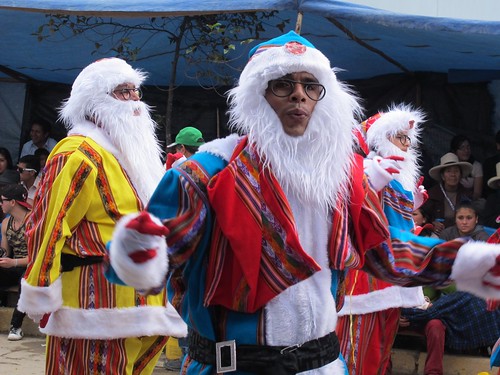 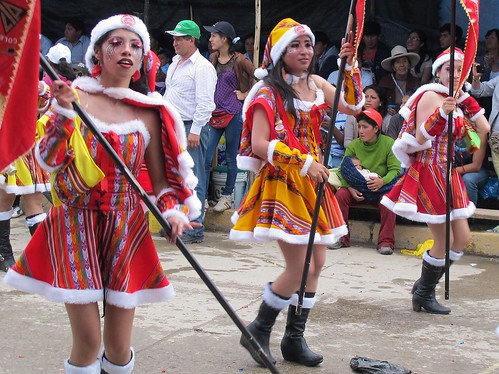 … and here are their sexy helpers 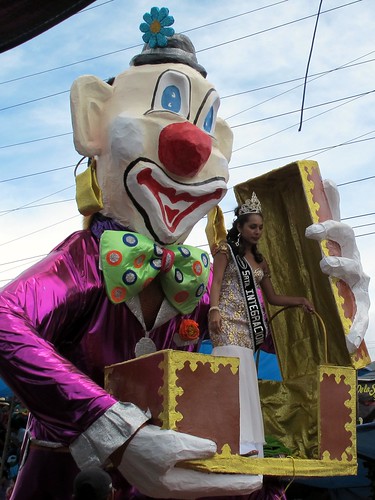 It seems that every town, village, district or whatever crowns a carnival queen. They then get to enjoy the privilege of precariously perching on a moving trailer as more obnoxious members of the crowd try to soak them with water canons and bombs 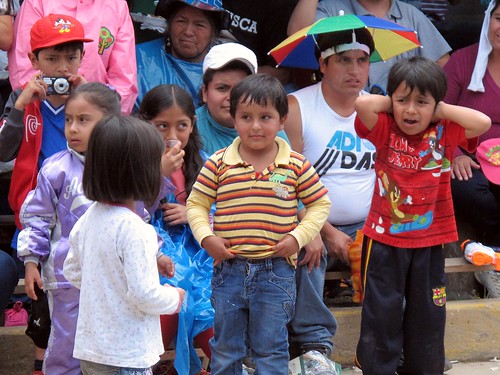 Watching the crowd was often more engaging than the parade… it was loud! 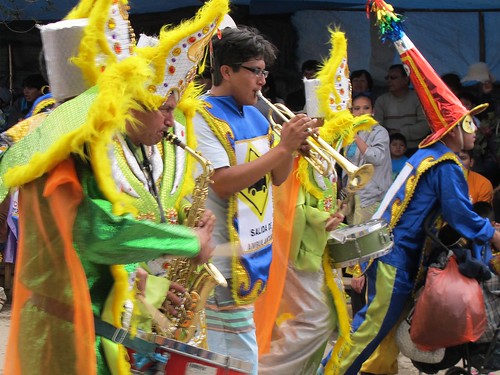 Every band of musicians seemed to be playing the same tune. As the hours ticked by and the participants became increasingly inebriated the tunes swung more and more 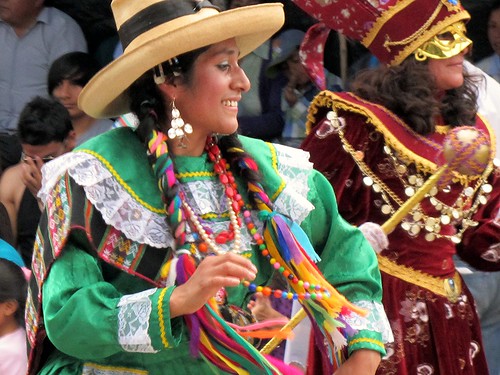 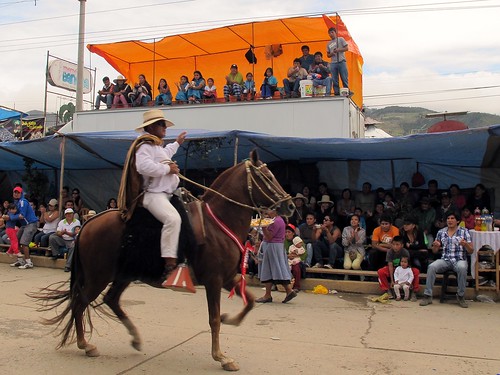 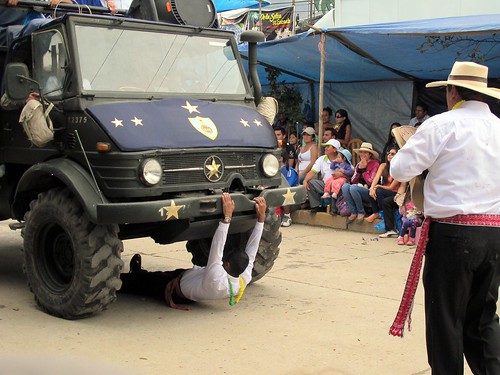 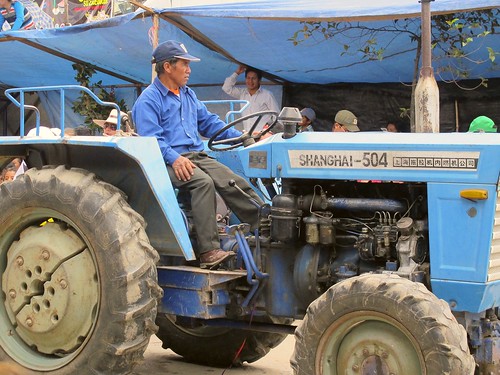 Floats don’t pull themselves! I loved the guys on tractors, I think I was attracted to their complete lack of effort to join in with the carnival spirit… I identify with that! 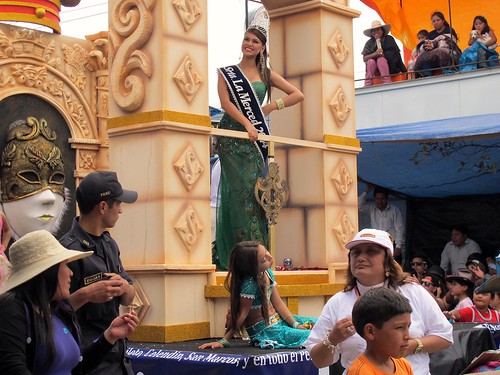 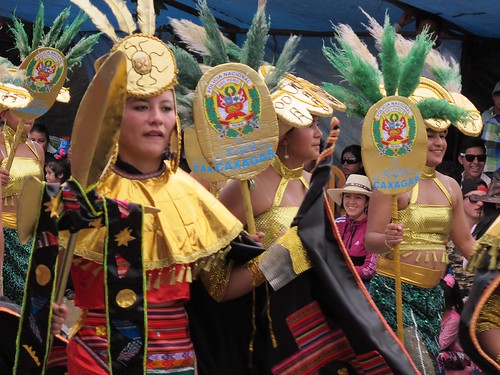 Representatives of the National Police service. I’m pleased to see that there is an enormous amount of female Police officers in Peru 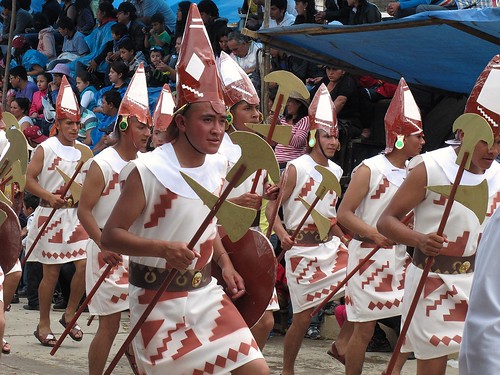 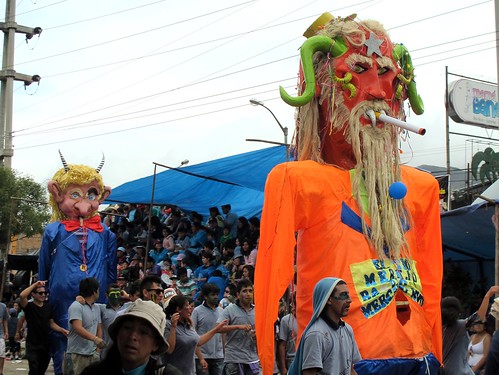 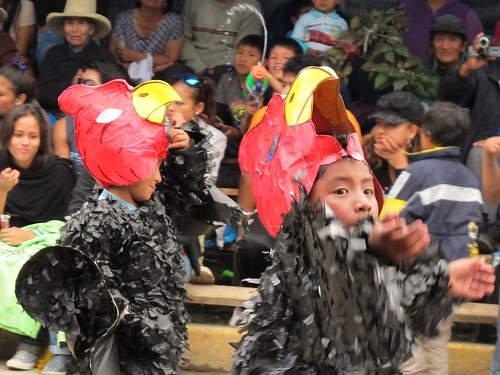 Notice the little tyke with the water cannon? There was a lot of them around. Fortunately for us we were entertained by a group perched atop a truck opposite our seats who had an endless supply of water… thankfully we were out of range 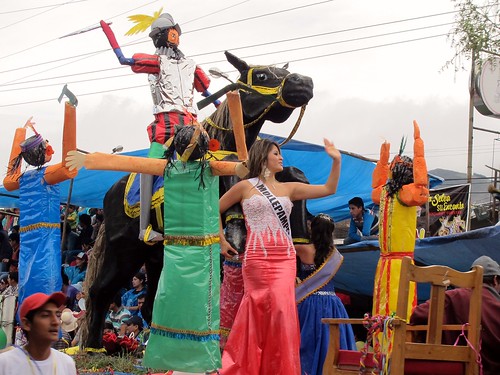 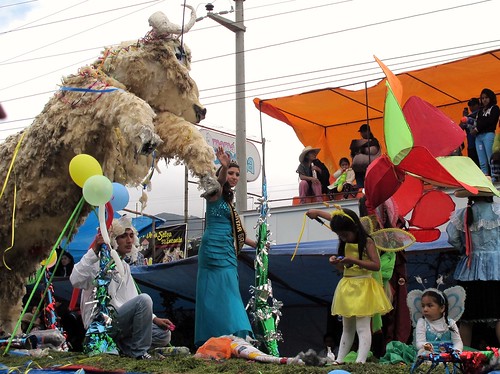 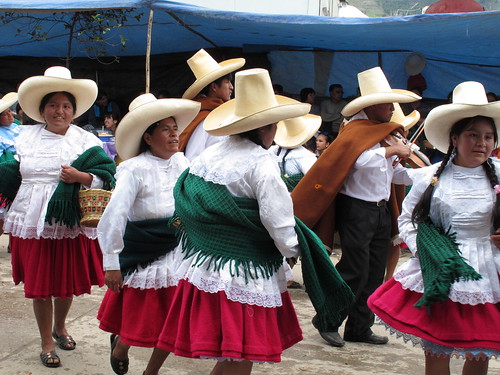 Of all the participants in the parade I particularly enjoyed those dressed more traditionally. Usually from a village they seemed the happiest to be there 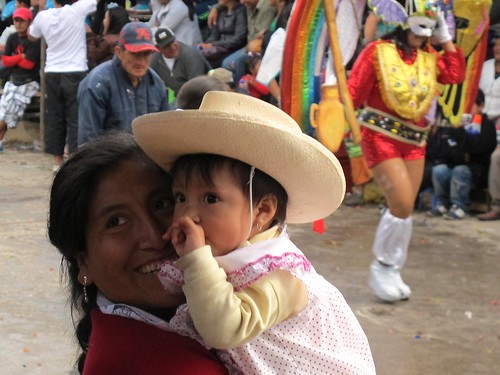 … the afternoon deluges washed the paint from the streets…

The streets safe to walk again

Having been in Cajamarca for a few weeks I’ve discovered a few things that may help future visitors:

There are a few bicycle repair shops around town but not many decent shops. The best place to get high-end stuff is bizarrely at the Kawasaki dealership. Kawasaki Bikes specializes in downhill mountain biking and motocross. They have a decent looking bicycle workshop and will happily order parts in for you from Lima. They don’t stock that much but what they have is quite high-end.

The best general shop I found is at 138 Jr. Revilla Perez. Walk north east on Del Batan from from the north corner of the Plaza de Armas. The shop is about 6 blocks up.

Fruit and vegetables are best bought from one of the numerous markets around town. I found the best bread came from a Panaderia a few blocks north west of the Plaza de Armas on Del Comercio. Good cheese and dairy products are easy to find in the numerous specialist shops the are dotted liberally around the town center and beyond. If you want to get everything in one place then there are two large supermarkets. The best is Metro, located next to the El Quinde shopping mall on Av Hoyos Rubio, cuadra 7. The alternative is Plaza Vea in the new Plaza Vea mall, Av. Via de Evitamieto Norte and Av. Prolongacion Ayacucho.

Plaza Vea is the place to go for outdoor shops. It houses Columbia and North Face stores. There is also Explorer, an outdoor offshoot of the Marathon sports stores. They sell all major outdoor brands from Patagonia to Mammut and Craghoppers to Berghaus. A really good store that even has some basic climbing gear.

I can’t recommend Casa Mirita enough as a place to unwind. They’re very bike friendly, the wifi great and reliable, the shower hot and the kitchen amazing (complete with toaster, toasty maker, juicer and everything else you’d ever need).

Vicky and Mirita are helped with the business by Englishman and cyclist Alan Malarkey. At the time of writing he was with his bike in Colombia but still responded quickly to emails.

There are a few places to get a half decent cup of coffee in Cajamarca. Internet research will lead you to Cafe Van Gogh at Prolongación Amalia Puga 126. The owner is really friendly, the coffee good and the art worth a visit in itself. However, my favorite coffee came from the espresso bar in Hospedaje los Jazmines at Amazonas No. 775. Again, the owner (a German) is very friendly, the place is relaxing and it’s a little cheaper than Van Gogh.