Banff is like a beautiful whore, you know you shouldn’t but you can’t help but fall in love with her. Nestled invitingly on the Bow River beneath towering strata strewn mountains, Banff has brought the trendy tourist into our realm for the first real-time. Gone are the days of one horse towns, this is a plastic world of skinny jeans, boutiques, night clubs and backpackers. The place is polished and undoubtedly beautiful yet it comes across as almost a pastiche of itself. I would not want to make a house a home in Banff but welcome sitting in its coffee shops, taking an uncomfortable satisfaction from eavesdropping on the ‘wacky’ tales of the younger backpacking community as sexy young ladies in tight yoga pants repeatedly distract me from more enterprising pursuits. You couldn’t visit this part of the world and not visit Banff but in the context of the last couple of weeks riding it is nothing more to us than a welcome and incredibly effective distraction from the upcoming westerly slog over to Vancouver.

Banff viewed from the summit of Sulphur Mountain

Slouched on the couch in a sun drenched apartment in Canmore, just down the road from Banff, I find myself reflecting on a couple of weeks of exceptional freedom and circumstance. As the fog slowly lifts from my party dulled mind (we taught Banff how to party last night) I have to ask myself ‘Where did it all go so right?’ How lucky we are that fate has dealt us some of the most exceptional weather in which to ride down the stunning and dramatic Icefields Parkway. How spoilt we are that a few pitchers of stout in the Jasper brewery should land us a night in the most amazing house and the company of an exceptional character. And just how did I wind up waking up this morning in a comfortable Banff hotel room beside an attractive young lady?

The story of the last couple of weeks: Fall colours, blue skies, sunshine and beautiful topography

It was a week ago today that Justin and I rolled into Jasper. Justin’s faded memories of an earlier visit and his trusty Lonely Planet ensured that the charm and authenticity of this slightly tourist tainted paradise would come as no surprise. Jasper is without a doubt somewhere I would feel happy to lay some roots. Marking the start of the 230km Icefield Parkway south to Lake Louise, it knows its place, sitting comfortably on the subtler and more sophisticated side of things to Banff. Jasper wouldn’t be what it is without tourism yet beneath that commercial veneer lies a sense of community and homely warmth.

Having washed ourselves and our clothes we retired late afternoon to the local Jasper brewery. The plan was to have a couple of beers and then ride out to one of the closed campsite for some free camping. The drink was already flowing freely by the time we were joined by Marc who with his pal Dan are in the process of a gruelling paddle from Lake Superior across to the Pacific. I am ordinarily narked by people who attach a worthy cause onto their adventures but these guys were genuine and true in their approach to their sustainability message. This is not a trip onto which the sustainability mantra has been tacked, but an all together more organic intertwining of the strands of cause and expedition. Also sporting the grizzled beard of an expeditionist, Marc pulled out the tools that he had made himself and then in turn put to use in fashioning the Birch Bark canoe that is now carrying their dreams up and down lakes and rivers to the Pacific. It was great to meet guys who were devoted to an entirely different form of expedition. Mutual adoration flowed between us as we marvelled at their discomforts, the slow pace and intensity of their set-up, while they were suitably impressed by the scale of our ambitions.

The bar also threw another interesting character into our stumbling path when I got talking to Steve, a Jasper resident and keen cyclist who turns out to have more bikes than I’ve had hot dinners. With his own South American tour coming up Steve was inspired to offer us a roof for the night. So, just after 10pm we found ourselves meandering back to Steve’s gorgeous home to reflect once again on the kindness and trust that virtual strangers continually show us.

Yours truly enjoys the incredible Peyto Lake from Bow Summit

Since Jasper we have been consistently treated to clear blue skies, temperatures around 20 degrees C and blazing sunshine, reportedly the best weather that the area has had all summer. I could lay down countless poetic descriptions but some times pictures are worth a thousand words. Although mornings are cold and our water has been known to freeze overnight, the weather has been almost freakishly good for October. We had been expecting this time of year to dust us with snow yet reality has had us cruising up as high as 7015 feet in short sleeves and smiles. On a few days even the sun-starved legs have made an appearance! However, it has to be said that it was knowledge of this weather window that led us into the Rockies and the Icefield Parkway and away from our surge towards Vancouver. 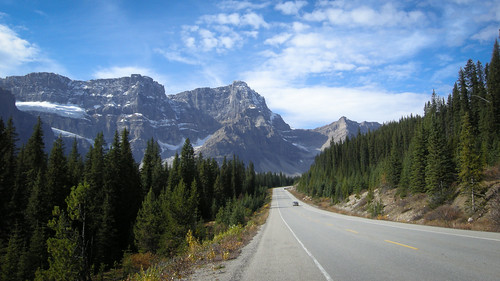 Dominated by jagged snow-capped peaks, the Icefields Parkway amazes at every turn

Anyone who has driven the Icefields Parkway will appreciate just how stunning the mountains, lakes, glaciers and rock formations are. Combine this unique beauty with our fantastic weather and the mellowness of bike travel and you’ve got yourself one huge dose of inspiration. Confident in the weather we dialled the daily mileage right down so as to prolong the experience. We’d been doing days as long as 74 miles on the way into Prince George, a distance that we’d seldom make half of whilst on the Parkway. Long contemplative lunches and even some hiking amongst some of the most amazing mountains I’d ever seen were our rewards for deciding to brave a trip into the Rocky Mountains. 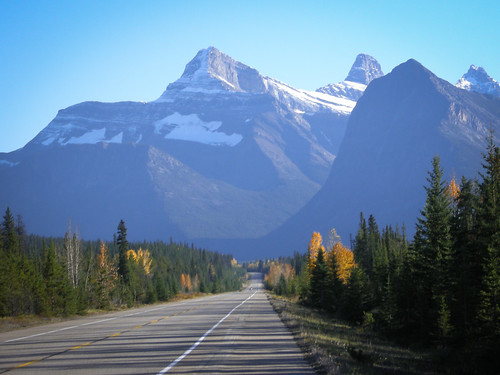 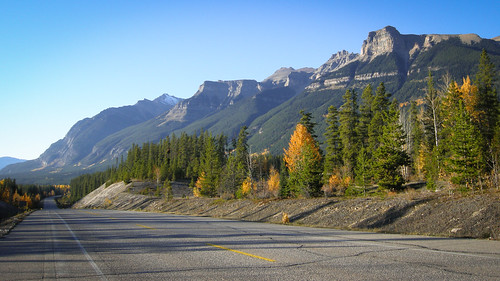 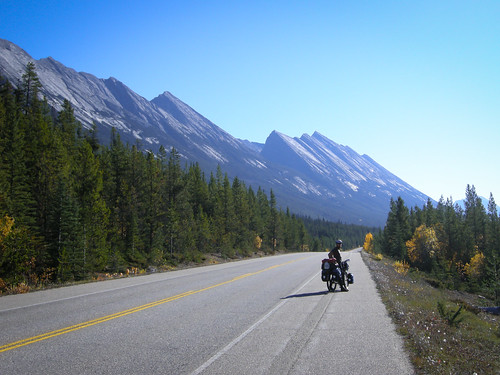 … of all shapes and sizes… 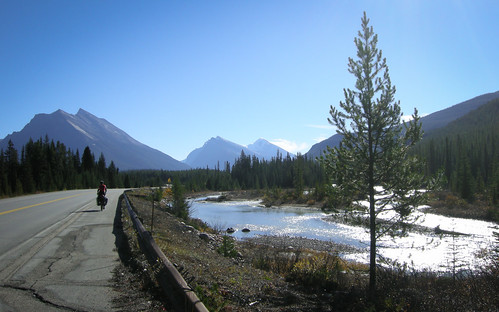 … past lakes and through beautiful forest… 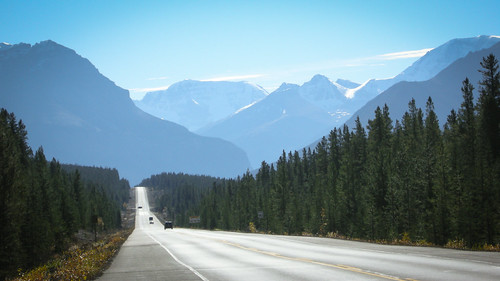 … riding the Icefields Parkway was definitely a detour well made

Justin battles a cross wind as the Columbia Icefield looms

When we were sure that our trail would be taking us to Banff, Justin put the word out to his contemporaries down in his home town of Bozeman, Montana. The result was that a couple of his friends had decided to brave the ten hour drive to come and visit their home town hero and treat us to a change of scene. We had been in email contact with a potential host just outside of Banff and decided to stay with them for a night before Justin’s friends arrived upon which we’d go out on the town and find somewhere in Banff itself to stay for that night.

We eventually rolled into Banff a couple of days ago  where we followed protocol and went to the local brewery, the sister brewery to that in Jasper. Steve in Jasper had told us to introduce ourselves to the owner which we duly did and were rewarded with some free beer to sip as we waited for a call from Katrina, who along with her husband Mike had agree to take us in for a couple of nights. Time went on but eventually the bar phone did ring and it was our gracious host who had called to inform us of a bit of a balls up. Justin had been in email contact with Katrina but had never spoken to her so when Mike got a phone call from a cycle tourist named Justin he assumed it was us and shepherded him and the three others of his crew into their delightful little two bedroom apartment. Obviously this group was not us and thus out of the blue they’d managed to acquire themselves four extra cyclists. In the spirit of their incredible generosity Katrina drove back to Banff to pick us up and add us to their burgeoning clan. It turns out that the other group were on a year-long trip from Ontario down to Costa Rica in the name of sustainability. Unfortunately, contrary to our paddling friends these guys seemed to be warping a good cause into justification for their trip; the idea for the cycle ride came first and the good cause followed. Needless to say that I found this group particularly uninspiring and am actually angered by this kind of self-righteous ‘charity’ angle. I feel that it’s a bit of a con to wrap up an entirely selfish pursuit in charity, especially (as in this case) where people were contributing money and food to fund their journey on account of this association. I failed to see anyway in which anyone is actually benefitting from their ride aside from the riders themselves who are obviously enjoying a fantastic holiday, much like myself. There’s no shame in adventuring for adventures sake is there? This takes nothing away from true fundraisers who are using their self-funded tours as vehicles to raise funds for a pre-existing worthy cause.

Looking west from the summit of Sulphur Mountain, Banff

Yesterday Justin’s friends Cassie and Caitlyn arrived from Bozemen and succeeded in taking our minds far away from the tour. A hike up Sulphur mountain, followed by a soak in the hot springs set us up perfectly for a night of serious ‘Banffing’ in Banff. It was truly a massive release to go out on the town and dance the tour out of our minds. After our right royal rinse-out we retired back to our hotel room, the first accommodation save for two nights at Stewart campground we’ve paid for since Deadhorse. Squeezing four people into a two bed room we made it economical and cozy.

Morning on the amazing Icefields Parkway

Now the vacation is over and we’re grasping at regaining the focus that will take us west through Glacier National Park and Kamloops to the Sea To Sky highway where we’ll pass through Whistler on our way to Vancouver. I’m looking forward to tackling some challenging weather and severely shortening daylight hours.